Day 1-Drive to Wilpattu National Park
From the airport we drive to Wilpattu National Park. Despite Wilpattu's location in Sri Lanka's dry zone, it boasts nearly 60 lakes and is renowned for leopard, elephant and sambar deer sightings. This afternoon you will go on a full day jeep safari in the hope of spotting the elusive leopard. Overnight hotel. (Dinner and breakfast)

Day 2 - Visit Dambulla en route to Sigiriya
After breakfast we drive to Dambulla, where a great series of caves have been turned into temples (dating from the 1st century BC). We will visit five separate caves, which contain a large number of Buddha images and a few sculptures of Hindu Gods. This UNESCO World Heritage Site is visited by crowds of worshippers. Afterwards we continue to Sigiriya. Overnight at hotel. (Bed & Breakfast)

Day 3 – Visit Sigiriya and Polonnaruwa
A morning climb brings us up to the redoubtable Sky Fortress. The ruins of this fifth century fortress are one of Sri Lanka’s major attractions, a stupendous sight to behold and a feat of consummate engineering skill. A switchback series of steps and steel stairways (sometimes steep and challenging) ascend to the top.

Halfway up, tucked beneath a sheltering overhang of rock, are the famous frescoes - the Sigiriya Damsels, their colours still glowing. Magnificent views can be enjoyed from the summit of the rock palace (200m high). In the afternoon we explore the ancient city of Polonnaruwa, which reached its height of glory in the 12th century. The city still has many interesting and spectacular buildings and monuments. There is the Royal Palace Group with its Audience Hall, Bathing Pool and Quadrangle - a very compact collection of ruins.

Close by is the Circular Relic House, a curious round structure with a beautifully preserved ‘moonstone’ carved at the foot of a flight of steps. Another famous feature of the deserted city is the group of carved images of the Buddha known as Galvihara. Here there are four colossal figures, all of which are hewn out of solid granite. The Reclining Buddha is no less than 14m long! Overnight at hotel. (Bed & Breakfast)

Day 4 - Drive to Kandy
After breakfast we drive to the hill capital - Kandy. On the way we stop to visit the woodcarving centre at Naula and a Spice Garden. Finally we reach Kandy where our hotel is situated a short walk from the heart of this lovely mountain town. Lying in the mountains 112km northeast of Colombo, Kandy is, in climatic terms, a world apart due to its altitude of 500m above sea level. The town was captured by the British as late as 1815, and is known more for its cultural and spiritual importance than its history. Buddhists from all over the world come to this delightful old highland town, specifically to visit the Temple of the Tooth, the Dalada Maligawa.

The costly jewelled shrine of the Holy Tooth (said to be Buddha’s left canine) is kept in the upper floor of the original building. This relic was brought from India 1500 years ago and every year, at the time of the August full moon, it is paraded round the town with great pomp and circumstance. During this 10-night festival of Perahera, the Tooth (or a simulacrum) is borne along on a richly caparisoned elephant, surrounded by saffron robed monks and Kandyan dancers. Kandyan dancers can also be seen performing every night at one or two locales around town. This afternoon you’ll visit the temple in time for evening puja. Overnight at hotel (Bed & Breakfast)

Day 5 - Drive through the Hill Country to Nuwara Eliya
This morning we head off across the highlands, through green rolling hills covered in tea plantations, visiting a working tea factory en route to the hill station of Nuwara Eliya. After checking into our hotel we’ll take a tour around this little town, known as ‘Little England”, famous for its lake, golf and race course and well-manicured gardens. Overnight at Hotel Windsor, Nuwara Eliya (Bed & Breakfast)

Day 6 - Train to Bandarawela
After a short drive we then climb aboard the local train and head towards the former British hill station of Bandarawela. This journey is said by many to be one of the world's most scenic train rides as the train winds its way slowly through the stunning vistas of the tea clad hills. Overnight at Bandarawela Hotel, Bandarawela. (Bed & Breakfast)

Day 7 – Drive to Colombo
We take a scenic journey as we descend from the central highlands to the capital, Colombo, situated on the west coast. Proceed on a city tour of Colombo. Colombo is the administrative capital and economic hub of the country and is home to over 1 million people. Colombo is a diverse city due to its history of being colonized by the British, Portuguese and Dutch as well as being a port city along the olden day east-west trade routes. Overnight at Colombo city hotel. (Bed & Breakfast)

Day 8 – After breakfast transfer to airport for return flight

* Sample price indication based on 2 sharing and subject to change. 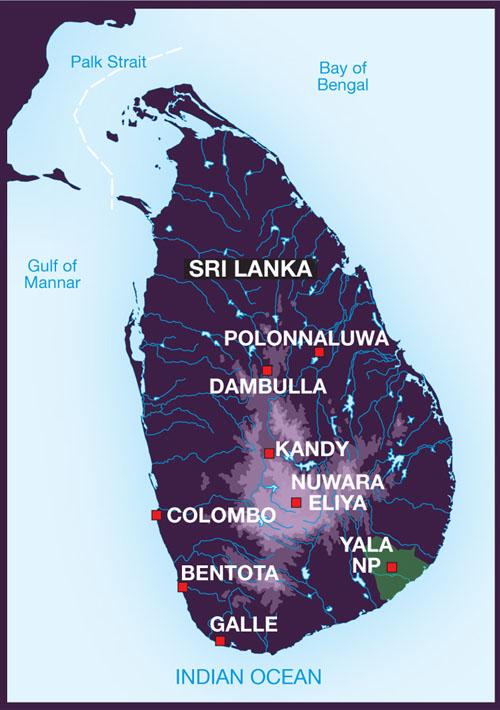