The Azores emerge majestically from the Atlantic Ocean more or less between Lisbon and New York, and are characterised by lush, green volcanic cliffs and picturesque Mediterranean style buildings.

The Archipelago of the Azores is made up of nine volcanic islands situated in the middle of the North Atlantic Ocean, approximately 1300 km west of Portugal and 3900 km from the North American coast.  The Azores is self governed as an Autonomous Region, with the Regional Government located in the city of Ponta Delgada, Sao Miguel.  The population of the nine islands totals 237,000 people.

Influenced by the Gulf Stream, the islands provide a convenient resting place for the world’s largest pelagic species, whilst the underwater arches, tunnels, caves and cliffs provide a haven for sub tropical fish and stunning silhouette photography opportunities.

Beaked whales, sperm whales, fin whales, humpbacks, false killer whales, spotted, bottlenose and Risso’s dolphins, turtles and more are spotted from the surface May to October.  Whilst rare to see them when diving, it is not unknown to hear them.

Experienced divers will enjoy challenging sites such as Ilheus das Formigas and Dollabarat Banks (Available from Sao Miguel & Santa Maria on RIB day trips). Formed from volcanic mountains rising from the sea bed or deep narrow channels between the islands, pelagic encounters in strong currents are frequent in the summer months. Divers staying on Pico or Terceira can experience similar exciting dive condition at Princess Alice Bank and San Jorge. Please note trips to these sites and the Blue Shark ‘season’ are best served during the time of July to early October.

Note that Regaldive do not recommend you travel to the Azores for diving holidays until mid-June onwards. However, you can still enjoy the whale watching and could take a gamble on the weather for diving if you wish - we are happy to organise your holiday as the islands have so much to offer.  Best months are July, August, September and October.

Of the nine islands in the Azores, Sao Miguel is known as ‘Ilha Verde’ or the Green Island.  Part of the Eastern group of islands, Sao Miguel provides a fantastic introduction to what is on offer both above and below water in this fascinating Atlantic outpost. Hosting the islands’ largest town, Ponta Delgada, the coastline boasts a number of dive sites.

The Island of the Sun - Santa Maria

Rising dramatically from sea level to peak, Pico’s volcanic tip at 2351m dominates the beautiful land and seascape of the central island group. The island’s steep slopes continue underwater, and it is these deep waters close to the island’s shores that make Pico the diving, whale and dolphin spotting destination that it is.

Terceira’s unique underwater rock formations, walls and an anchor graveyard offers something for divers searching for a selection of shore dive sites, as well as RIB diving.

Angra do Heroismo, the island’s main town, was given World Heritage status by UNESCO in 1983.  The east of the island, close to Praia da Vitoria, offers sheltered coves and small rough sand beaches.

Map of the Azores

The Azores islands are well suited to twin centre island combinations, which we recommend for stays of 10 nights or more.

If using the direct summer charter flight to Sao Miguel, stays of 7 and 14 nights are possible, with inter island flights. Flights are also available using TAP, via Lisbon. A tailormade booking is necessary to work out the best itinerary based on the island flight connections, as all islands do not connect daily from Lisbon and the UK daily - please enquire. 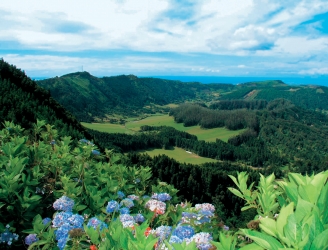 Influenced by the Gulf Stream, the Azores islands provide a convenient resting place for the world’s largest pelagic spe... 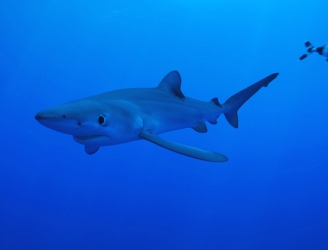 Santa Maria differs slightly in character to its neighbours through its dryer, warmer climate as the island is older, and ... 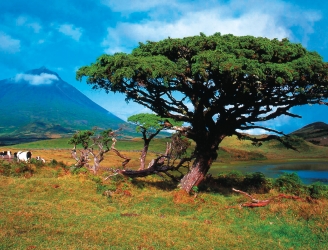 Rising dramatically from sea level to peak, Pico’s volcanic tip at 2351m dominates the beautiful land and seascape of th...

Terceira’s unique underwater rock formations, walls and an anchor graveyard offers something for divers searching for a ...