Experience Level: We recommend that you are a PADI Advanced Open Water Diver or equivalent with a minimum of 30+ dives for this itinerary. Most diving in Palau is drift diving so guests should be comfortable with a current.

This 10 night liveaboard adventure offers the chance to explore some of the finest diving in Palau. As with all diving trips, the choice of dive sites visited during the itinerary will be affected by a number of factors including weather, tidal movement, moon phase, experience of divers and number of vessels.

Check-in - Guests may board the yacht any time after 4:00 pm on Sunday.

Guests may dive up to 4-5 dives per day and there is night diving on 3 nights of the charter, conditions permitting.

All dives are made from the 10.6 metre custom built, high speed, outboard skiffs capable of carrying 18 guests for quick access to even the most remote dive sites. The boarding ladders were designed for convenience to allow divers easy exits and entries.

The tenders return to the mother ships after each dive. Each diver has his/her own tank rack, locker, and spacious seating area. There is very little diving from the mother ships but by utilising the custom dive skiffs for these short runs, guests will still be in close proximity to Palau’s finest diving. Skiff diving has proven itself in this location. In between dives, you may snorkel, explore secluded beaches, or just relax with a cold drink and mid-morning snack.

After breakfast on Saturday guests will board the dive tender for a snorkel trip to Jelly Fish Lake (subject to availability) then a dive at Chandelier Caves. The Palau Aggressor II and Rock Islands Aggressor will make their way to port to provision and refuel for the following week. The guests will then meet the yacht at the dock after a fun cruise through the Rock Islands for lunch. Following lunch, guests may stroll through town, shop, sightsee or visit the Museum. Both boats host a cocktail party Saturday evening at 6:00 pm. The crew will recommend local restaurants and arrange transportation to the restaurant of your choice for dinner Saturday night.

Palau Dive SitesA wall dive that begins as shallow as 2' at low tide and drops to 600'. It is considered by most to be the most beautiful wall dive in Palau because of its abundance of hard and soft corals, seafans, schools of pyramid butterflyfish, and a multitude of tropical reef fish.

The best known and most highly rated dive site in Micronesia features a shallow coral shelf that projects out into the ocean and has vertical walls on both sides. An upwelling created by the currents attracts schools of fish and large pelagics to the top edges of the walls. The dive is best known for its schools of gray reef sharks that cruise the edge of the wall. Two resident Napoleon wrasses often accompany the divers throughout their dive. Dogtooth tuna, eagle rays, manta rays, white tip and hammerhead sharks, turtles, schooling barracudas, and schools of reef fish populate the site.

This is a series of four large holes in the top of the reef that converge to form a gigantic underwater chamber. The chamber has a huge opening on a wall that is home to soft corals, sea fans, sea whips and hard corals. Large pelagics often encountered here include tuna, jacks, gray and white tip reef sharks, barracuda and eagle rays. Grouper, Napoleon wrasse, triggerfish, Moorish idols, butterflyfish, anemones and turtles are common at this site, which is situated next to Blue Corner.

A short swim through a tunnel at depth of 35' opens into a cave consisting of three chambers. Beautiful stalactites formed by water dripping down through the rock island above, hang from the ceilings and give the caves their name. Tiny holes to the outside wood allow fresh air to enter the chambers so that divers can surface and admire the beautiful surroundings.

This natural channel, situated on Palau's eastern coast, is home to an entire family of cuttlefish. The uncommon creatures, related to the squid family, are as accommodating to photographers as they are rare. They are not often encountered by divers because of the relatively few locations in he world where they can be found, their ability to remain relatively motionless, and their excellent camouflage.

This man-made channel through the southwest side of the barrier reef is home to two diving areas. One site, known as Manta Rock, is a natural cleaning station where giant manta rays come to have their bodies cleansed of parasites and debris by cleaner wrasses. Gray reef sharks also often avail themselves of the wrasses' services. The area is also inhabited by barracudas, snappers, titan triggerfish, gobies, lionfish, leaffish, and an octopus. Nearby is a coral garden that features crocodile fish, nudibranchs, flatworms, anemones and clownfish.

Halfway between Blue Corner and Big Drop-Off, this vertical wall is similar to Blue Corner in that it is a shallow shelf that juts out into the ocean, catching the current and creating an upwelling that attracts schools of pyramid butterflyfish and barracudas, along with a number of gray reef sharks. The steep wall is covered with soft corals and seafans.

One of the best collections of hard corals in the Pacific, this dive features a spur and groove reef structure that supports turtles, cuttlefish, anemones, tridacna clams, white tip reef sharks, and thousands of small schooling fish.

The island of Ngerchong, just beyond Denges Passage has two dive sites nearby: Ngerchong Outside and Ngerchong Coral Gardens. Ngerchong Outside is a sloping wall dive featuring sea fans, anemones, soft corals and many hard coral formations. Sharks, bumphead parrotfish, and schooling fish are frequently seen here, as well as an occasional manta ray. The Coral Gardens, also known as Ngerchong Inside, is probably the best dive in Palau for seeing an abundance and variety of hard corals. Table coral, staghorn coral, elkhorn coral, mushroom coral and brain coral are just some of the varieties of corals found here. In addition, many anemones with clownfish, along with cuttlefish, turtles and other fish thrive here. This dive can be enjoyed at any depth between 10' and 80'.

The island of Peleliu, at the southern tip of the main archipelago of Palau, is bordered by magnificent walls. The dive sites include Peleliu Corner, Yellow Wall, and Orange Beach, among others. Peleliu dive sites are mainly steep walls covered with sea fans, sea whips, hard corals and anemones, but dominated by soft corals. Peleliu is an excellent place to observe large pelagic life, particularly sharks.

A sloping wall just outside the entrance to Koror Harbor that is covered with giant seafans. The top of the wall is a beautiful coral garden loaded with tropical fish and invertebrates.

An extraordinary deep dive on the west side of the Palau, close to the Ulong Channel. The dive begins on a sheer wall with the opening of the tunnel starting at 70'. You enter through an opening, which is about 50' across and 20' high, and swim through the tunnel, which parallels the wall for 150'. The inside of the tunnel is a large cavern with a ceiling at 80-90' and the floor at 120-130'. Halfway through the tunnel is a "Window" in the wall that looks out onto the deep blue. You exit through a large opening on the wall at 80'. Stingrays, turtles, schools of jacks, and sharks can be seen in and around the tunnel.

This channel is located on the west side of Palau, close to Siaes Tunnel and Wall. Its entrance is surrounded by walls that are topped by beautiful coral gardens. On the incoming tide, the mouth of the channel is filled with gray reef sharks. The channel extends for a distance of approximately one-half mile, averaging 100' in width. The maximum depth is about 60'. Coral covered walls run the length of the channel on either side. A shallow ridge running the center of the channel is blanketed with soft corals, hard corals, sea fans, and anemones. Unique to this site is a huge patch of plate coral resembling lettuce leaves that is home to schools of squirrelfish, soldierfish and glasseyes. The current provides a gentle push, resulting in a beautiful, leisurely ride along the channel.

Located within the rock islands just a short distance from Jellyfish Lake and Clam City, this channel is best dived on the east side along a wall that starts at the surface and reaches a depth of 80'. Soft corals, sea fans, anemones, blue and red starfish, crown of thorns star-fish, crabs, pipefish, and a large variety of sea slugs, flat worms and nudibranchs can be found along this wall.

Wreck of the Iro Maru

A 145' long merchant ship sunk during World War II by American bombers, the Iro Maru sits upright in 120' of water just 10 minutes south of Koror. Three mast and gun turrets at the bow and stern support a large variety of invertebrates and hard corals. The main deck is at a depth of 80'with open holds containing oil drums and machinery. 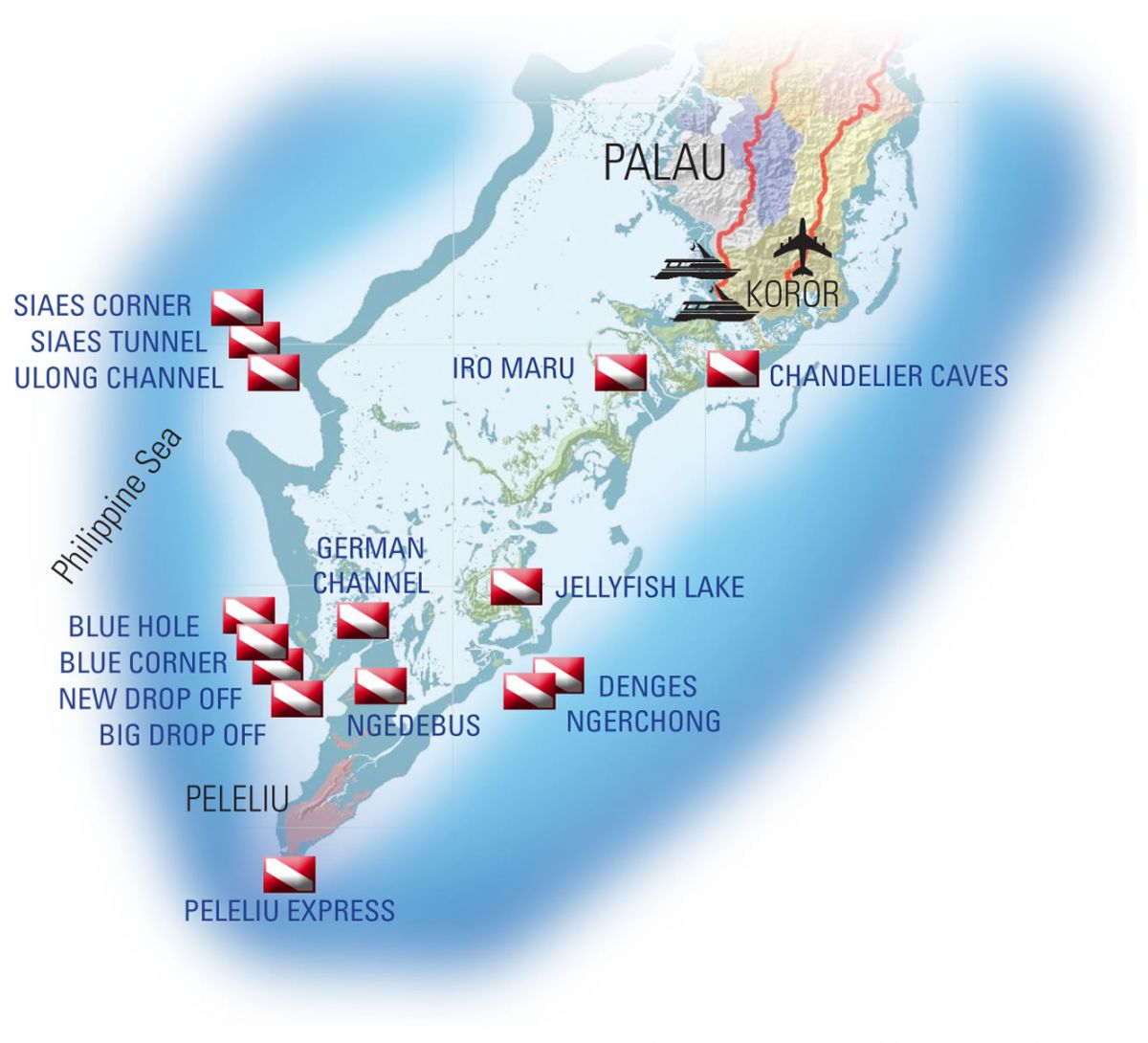