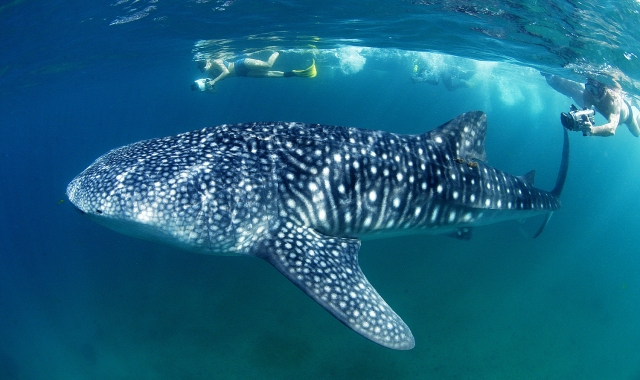 Diving with whale sharks ranks near the top of any diver’s bucket list. These gentle giants of the underwater world may look intimidating due to their enormous size but in fact they are known to pose no threat to humans, and munch their way through algae, plankton and krill, filtered from seawater through their enormous mouths. The largest fish on the planet, whale sharks can be up to 40 feet long and live for 80 years!

These enigmatic and beautiful creatures are more often seen close to the surface, making that elusive encounter all the more possible for divers and snorkelers alike. Despite their dwindling numbers and endangered species status, we are delighted to report that whale shark awareness is on the increase and we have recent sightings from Regaldive divers holidaying in Egypt, Oman, Philippines, Galapagos, Azores, Djibouti and other destinations around the world.

To mark this week’s International Whale Shark Day, we’ve put together a couple of options for those looking to maximise their chances of an underwater encounter with these gentle giants. Just don’t forget your camera!

The Daymaniyat Islands, off the coast of Muscat in Oman, have been placed under the protection of UNESCO and can offer less experienced divers the rare chance to swim with whale sharks, encountered from June to September. The islands provide divers with pristine coral gardens, walls and abundant fish life to admire, as well as other shark species including leopard sharks. Seven nights’ at the Nabucco's Al Sawadi Beach Resort, which proves easy access to the Daymaniyat islands, cost from £970 per person to include flights, transfers and seven nights’ half board accommodation, based on two people sharing. A three day dive pack costs from £173 per person, to include two unguided boat dives per day, air tanks and weights.

For more experienced divers, the Galapagos Islands are recognised as one of the world’s best locations to encounter whale sharks in large numbers, specifically between May and November. Regaldive’s eight day Galapagos Sky liveaboard journeys around Wolf and Darwin Islands, allowing divers the chance to swim alongside whale sharks, hammerheads, Galapagos sharks, dolphins and rays. The liveaboard includes two dives at Darwin’s Arch, where seasonal sightings of whale sharks are common. Costing from £4,591 per person, the package includes flights, transfers, two nights’ B&B hotel accommodation, seven nights’ Half Board boat accommodation on board the Galapagos Sky, some drinks, three dives per day on Wolf and Darwin Island, air tanks and weights.

Book by 16 October 2013 for an incredible saving of up to £660 per person on liveaboard sailings aboard the luxuriously-appointed Galapagos Sky. This boat offers really incredible levels of service - they will even bring you tea in bed! This limited special offer is valid for sailings on 6, 20 and 27 December 2013, and 17 January, 7 and 21 February, 14 and 28 March 2014.

Thanks to Simon Rogerson for the incredible imagery of whale sharks in Djibouti.

Save up to £660pp on must-dive Galapagos