Self drive through the Sumail Gap to the interior of Oman... In Nizwa, stay 2 nights at the Golden Tulip Hotel.

Spend a full day exploring some of the many highlights of Nizwa and the surrounding area. Begin in Nizwa itself, visiting the traditional goat market and modern souk; traders bring their goats from around the surrounding area in a timeless tradition, offering a unique insight into traditional Omani life. Continue onto the 17th century fort, built to guard the Sumail Gap during the struggle between the Sultan and the radical Imams. Nizwa was the center of Imam resistance right up until the 1950s when the Sultan had to call upon the help of the British to quell the rebels. Heading north, travel through the mountains, passing the dramatic craggy peaks of the Jebel Akhdar (‘Green Mountain’) range, the highest mountain range in Oman. Despite its desolate and barren nature, small settlements cling to the plateau areas, nestling in the lunar like landscape. For thousands of years self-sufficient oases have flourished in the folds of rocks, using an ancient irrigation system known as falaj. These are water channels that never dry up, often contoured round wadis or tunneled through the cliffs in order to tap the water table. Upkeep of the life-giving falaj is a community responsibility and contributes to maintaining harmony within a village. Stop en route to view the Al Hamra mountain range; at 3,000m, Jebel Shams (Mountain of the Sun) is the highest peak in Oman. Along the track to the summit of Jebel Shams, encounter an astonishing view down a sheer drop of 1000m to the bottom of the ‘Grand Canyon’, Oman’s very own (and equally spectacular) version of its American counterpart; at the bottom of this vast void, a wadi winds peacefully through the landscape. According to one theory, the canyon was once a huge cave and evidence of fossils and shells suggests that the canyon base was at one time covered by a shallow sea.

The route back to Muscat is through the stunning Wadi Bani Awf. Leave the smooth roads behind, and head into a narrow canyon with steep sided cliffs. The palm trees, scattered dwellings and interrupted streams create a peaceful atmosphere, where you can stop for a short walk before heading back to Muscat.

Fly back to the UK. 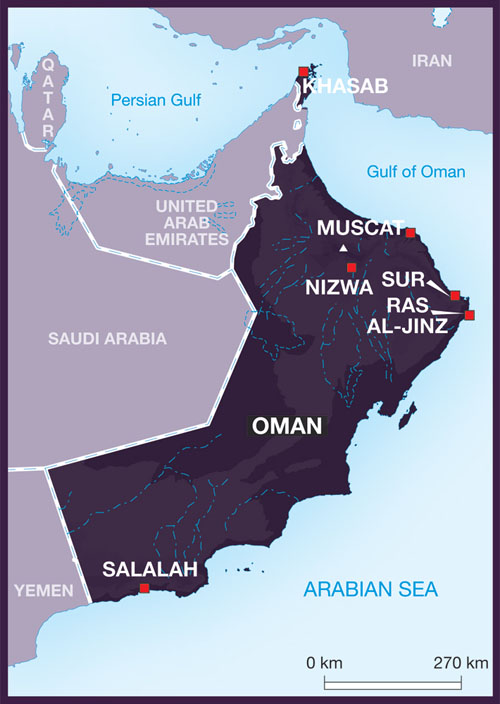 * Sample price indication based on 2 sharing and subject to change.