On days 2, 7 and 10, dives 3 and 4 will be substituted by an island visit. Prior to your flight home, you may also opt to visit the Interpretation Centre on San Cristobal Island.

The following is a description of the dive sites we may visit during your liveaboard safari aboard the M/V Galapagos Master. During 7 night itineraries we schedule 3 days at Darwin & Wolf, whilst for 10 night itineraries divers can expect 4 days of diving at these famed islands.

Please note: This itinerary involves some long distance travel and whilst we attempt to ensure the number of dives we have scheduled is fulfilled, bad weather can hinder the boat’s ability to reach a specified dive site in good time.  We wish to show you the very best diving possible yet the safety of all on board remains paramount. In the unlikely event we are unable to reach a specified dive site; we always do our best in offering diving at alternative locations.

After boarding at San Cristobal the Galapagos Master cruises to Isla Lobos for your check out dive.  The sheltered bay provides an excellent shallow spot, at a max depth of 9m (30ft), in which to check your dive gear but also become acquainted with some of the local marine life.  Sea lions playfully interact with divers, whilst sightings of turtles and rays are also common. Sea iguanas may be spotted too.

-    Punta Carrion – This boulder strewn reef provides a superb introduction to some of the larger pelagics we expect to see in the Galapagos, including white tip reef sharks but also the occasional hammerhead and Galapagos shark. Sea lions are ever-present and there is the opportunity for some macro critter spotting with sightings of neon nudibranchs. The wall has an average depth of 15m (50ft) and mild- medium current is to be expected.

-    Mosqueras -  lying in between Baltra and N.Syemour islands, this white sandy islet is not only home to a sea lion colony but supports a myriad of marine life from manta rays and bonitos to  Peruvian grunts and fields of garden eels, whilst occasional schools of hammerhead sharks may be seen here.  Average depth 20m (70ft) with a typically mild current expected.

Named after the German geologist, Theodor Wolf, this extinct volcano reaches 253m (780ft) above sea level and lies some 160km (100 miles) northwest of Isabela Island. Land visits are not permitted however bird life, including red-footed boobys and vampire finch, may be spotted from the boat. For our dives here we choose from a selection of reefs and walls, most having typically medium to strong currents where the use of gloves and reef hooks is advised. Schooling pelagics are the main draw with sightings of hammerheads, white tips and Galapagos sharks at each site. During the season (May – November) whale sharks may also be seen here. Divers should also be on the lookout for red-lipped batfish, barracudas, moray eels and dolphins!

-    La Ventana (the Window) – shallow lagoon leads down to a pinnacle and then out along the reef wall – average depth 15m (50ft).

-    Punta Shark Bay – Reef dive with an average depth of 20m (70ft), typically good visibility, however care must be taken in the shallow water where waves crash up against the reef.

-    Pinaculos (The Pinnacle) – known for its strong currents and speedy drift along the reef at an average depth of 20m (70ft), the site is excellent for shark spotting and the many cracks & crevices in the wall provide extra interest.

Darwin Island
This extinct volcano reaching 165m (490ft) above sea level was named in honour of naturalist Charles Darwin. It is amongst the smallest island within the Galapagos Archipelago and like Wolf Island, no land visits are permitted.

Perhaps the most famed dive site is “Darwin’s Arch” which provides an amazing drift dive along the wall at an average depth of just 9m. Medium to strong currents are to be expected but bring with them hammerheads, black tips, silky and Galapagos sharks – and in large numbers! Schools of jacks are a common sight, along with turtles, angelfish and moray eels. Occasional sightings of tiger sharks, manta rays and bottle nose dolphins make for a thrilling time spent here. Whale sharks may also be seen between May - November.

Fernandina Island
-    Douglas Cape – Situated on the northwest point of Fernandina Island, this wall dive, with an average depth of 20m (70ft), offers something truly spectacular and is now famed for the feeding marine iguanas that congregate here along with sea lions, fur seals and speedy penguins!

Isabela Island
-    Punta Vicente Roca – Alternatively known as “The Ice Box”, due to its chilling thermoclines, this point off the Northwest coast of Isabela Island offers a wall drift dive, along which mola mola can be spotted. The occasional Port Jackson shark may also be seen as well as the endemic Camotillo (White spotted sand bass). Yet Punta Vicente Roca is not just for the larger marine life but is also a fantastic place to spot pacific seahorses, frogfish, octopus, nudibranchs, flat worms and a variety of sponges. We stick to a maximum depth of 30m (100ft) with an average of 18m (60ft) whilst enjoying some milder currents!


-    Punta Albermale – Drifting along this wall on the north of Isabela Island, we stay at an average depth of 25m (85ft) to see manta rays, hammerheads, turtles, schools of barracuda and tuna.

-    Roca Redonda – This underwater volcano, with its bubbling streams of natural gas (fumaroles) plays home to schools hammerheads sharks and barracuda. Other commonly sighted marine life include Galapagos sharks which typically come close to divers during safety stops, as well as manta rays, silky sharks and some beautiful green/blue nudibranchs. With typically strong, changeable currents and some down currents, the diving here is challenging, though with an average depth of 18m (60ft).

-    Cabo Marshall –The craggy volcanic walls are covered with black coral bushes and the sheer variety of marine life is astounding. Sightings of manta, mobula and cownose rays are to be expected during the warm season (November – May). Meanwhile shark varieties include scalloped hammerhead, Galapagos and white tips. Schools of chevron barracuda and black striped salema are regular visitors along with yellowfin tuna and big eye jacks. And let’s not forget the sea lions and turtles!

-    Tagos Cove – On the west side of Isabela Island, opposite Fernandina Island, this shallow reef is an excellent late afternoon dive, where we have the opportunity to find seahorses, frogfish and long nosed hawk fish. 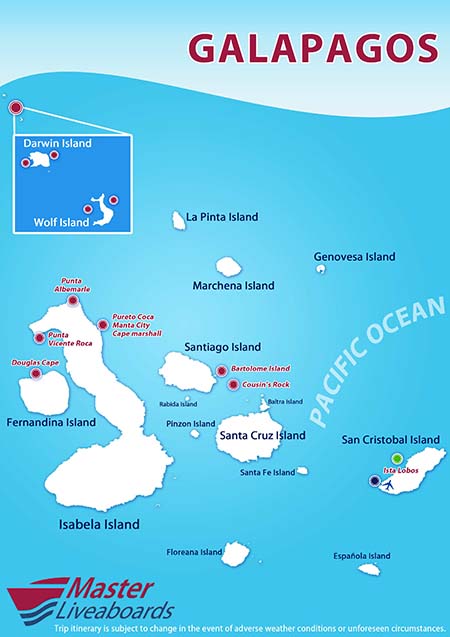 We share the top places to go diving with manta rays and the mobulid family worldwide.

Who doesn’t dream of walking in the sand and diving amongst the colourful marine life in the warm...