The Bahamas Aggressor’s (formerley Carib Dancer) 7 and 10 day itineraries cruise from Nassau through the Exuma Cays Land and Sea Park - an array of more than 350 small islands and cays streaming down from just 35 miles south of New Providence to the anchor islands of Great and Little Exuma to the south. This itinerary takes in a mix of walls and rich shallow reefs alive with every imaginable ocean critter. Night dives allow guests to experience entirely different marine life.

With all dives normally conducted from the main yacht, five dives a day are the norm. Diving begins Sunday morning and ends Friday before lunch when the Bahamas Aggressor returns to port. The crew hosts a sunset cocktail party on the final evening, followed by dinner ashore.  Saturday morning 8:00am means check–out and heading to either the airport for your flight home, or your chosen hotel. Throughout the week there will be opportunities to go ashore for swimming, snorkelling and beach combing.

Nassau
Lost Blue Hole - The rim of this large blue hole lies in 12m of water surrounded by coral heads, stingrays and many schools of fish. There is a lobster filled crevice at 24m. In the sand surrounding the hole, divers will find many small fish such as Banded jawfish, Seminole gobies and Tobacco fish. There are usually one or two nurse sharks here and during the spring a large school of Blacknose sharks inhabits the bottom of the 60m deep hole. This is the location of the Bahamas first lionfish sighting.

Periwinkle Reef - This is a shallow patch reef that is teaming with fish. The local Nassau operators feed fish here, so sergeant majors and angelfish will approach scuba divers looking for a handout.

Exumas
Amberjack Reef - A 15m patch reef that has prolific fish life. You will see reef sharks and up to ten large grouper. This dive also has many interesting small critters such as pirate blennies and garden eels. During the safety stop divers will be surrounded by a school of 100+ horse-eye jacks that hang out under the yacht.

Austin Smith Wreck - A 27m Bahamian Defense Force Cutter lying in 18m of water that sank in 1995 while being towed to San Salvador to be sunk there as a dive site.

Barracuda Shoals - This bankside patch reef has huge schools of fish as well as many small critters on the reef and surrounding sand.

Cathedral - This site is part of the Dog Rocks Reef. This reef starts at 10m and slopes off to 15m before dropping straight down into the Exuma Sound. The Cathedral is a large swim-through where the light filters down from above reflecting off the thousands of silversides that occupy the swim-through. There are many grouper and jacks that come to feed on the silversides. The wall has large stands of black coral and orange elephant ear and tube sponges. Pelagics, eagle rays and sharks are frequently seen off the wall.

Cracked Coral Head - This massive coral head rises 12m off the bottom. Several large swim-throughs make it looked like it is cracked.

Jeep Reef - This site named from a coral encrusted jeep that sits near the mooring is in the middle of the Exumas Land & Sea Park and hosts a healthy population of fish.  It is also one of the prettiest reefs you will ever see. Current that sweeps through this cut keeps the reef 's corals very healthy.

Pillar Wall - One of many excellent wall dives. It starts at 9m and slopes to 15m before dropping 1.5kilometres to the bottom. There are many caves and crevices. There is a large colony of Yellowhead jawfish in the rubble inside the reef.

Southwest Eleuthera
Cave Rock - A large coral mound in 15m of water surrounded by several smaller coral heads. There are several caves where you can swim from one side to the other. The large variety of corals and fish will amaze you. Hammerhead Sharks have been frequently seen here.

Monolith - Large mounds of coral rise out of the sand at the edge of the wall. They start at 30m and rise to 17m. There is a colony of Garden Eels in the sand next to the mounds.

Empress Pinnacles - This wall dive features 9m high pinnacles coming out of the sand at the edge of the wall. Pelagics are seen frequently in the clear water off the wall. There are large stands of black coral on the sides of the pinnacles. 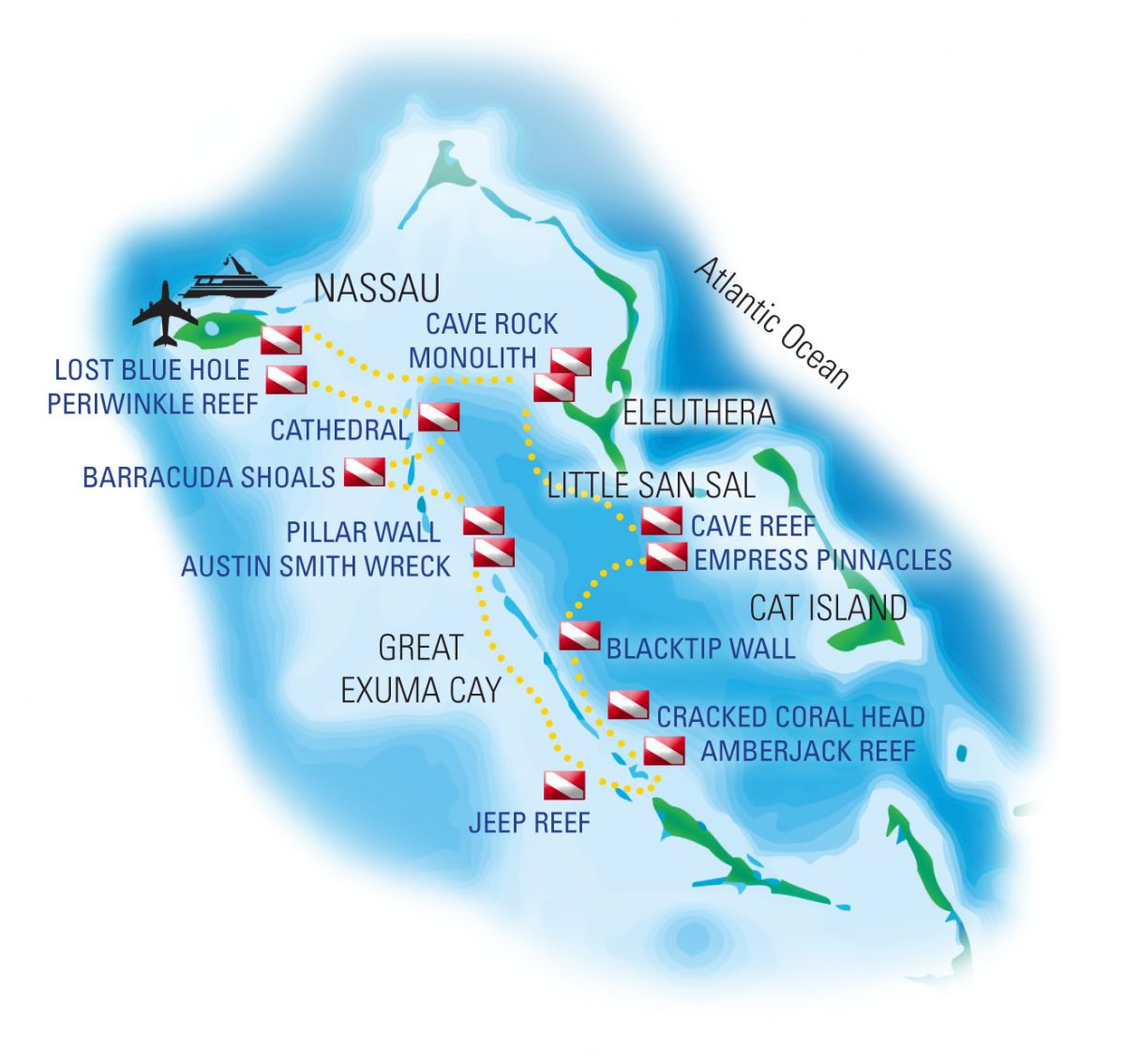