Similar to the Northern & Ras Mohamed itinerary, The Strait of Tiran and North cruise allows you to take in some of the most notorious wrecks and reefs the Red Sea has to offer as well as the pristine coral reefs of Tiran. The Tiran dive area is found in the entrance to the Gulf of Aqaba and is made up of four main reefs that form the top of an underwater bridge. These reefs, named after British cartographers (Jackson, Woodhouse, Thomas, Gordon), are world famous for their extraordinary diversity of corals and strong south westerly currents make them home to many large pelagic fish.

You must be a PADI Open Water diver or equivalent to join this safari. Please note that although the qualification needed for this itinerary is Open Water, Tiran is not for beginners and there can often be strong currents.

As with all diving activities, the dive guide has the final decision regarding any divers competency to complete any particular dive. 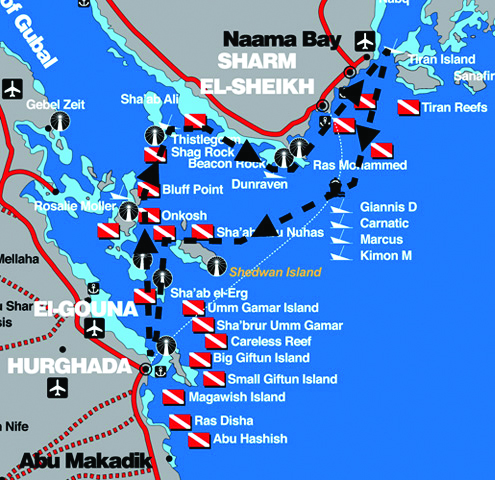 Probably the most famous of the Red Sea wrecks. The 129m English Freighter was bombed by German aviation on 6th October 1941. Today she creates an artificial reef on a sandy bottom at 32m max depth. She is home to an enormous variety of marine life and is especially popular with large schooling fish.

At the gate of the Straits of Gubal is 'Bluff Point' , which gets its name from the turbulence created by strong currents that beat the eastern wall of the island. The wreck of the 'Ulysses' lies on the reef 300m north of the lighthouse, starting at 5m and sloping to 25m. 'The Barge' wreck, south of the lighthouse, provides divers with a fun and unusual night dive. The wrecks skeleton creates protection for all types of night creatures.

This is a world renowned dive site, situated at the tip of the Sinai. Two small ergs are joined by a vertical wall dropping into the abyss. At Shark reef the current allows you to drift along the wall, rich with colourful corals. Moving towards Yolanda reef you reach a plateau scattered with small ergs and coral outcrops. Continuing around the reef you will come upon the scattered remains of the wreck 'Yolanda' complete with its cargo of toilets and baths. The whole of this area is big fish territory so keep an eye on the blue!

This is the most northerly reef and on its northern edge lays the wreck of a freighter serving as a stark warning to ships in the narrow straights. Dives are usually conducted from the moorings on the south side which is sheltered from the main swell and currents. Moving northwards you will come across a forest of spectacular Gorgonia fan coral at about 20 to 30 metres as well as many different kinds of reef fish. This site can also be done as a drift dive heading from the mooring towards the East with the reef on the left where it is mostly wall diving with excellent corals.

This is the longest reef of the four in the Strait of Tiran. Home to reef sharks and Eagle Rays, it is dived as a drift dive usually from South to North. Jumping at the southern part of the reef is a wall to about 30m covered with coral from the surface all the way down. There is a canyon going along the reef at about 25m which spreads out into a coral garden with sand alleys.

This is the smallest reef in the Strait and diving here is governed by the weather as there are extremely strong currents. The ends are vertical walls with a large plateau at about 25m on the south eastern side. This plateau often has sleeping sharks on the sand patches and the colourful coral has a fence of Gorgonia fans at the end.

This is the most southerly reef of the four and has a different topography from the others offering both a shallow plateau area and drop offs. A huge variety of reef fish and big schools of groupers can be seen here and on the sandy bottom at 4 to 5 metres there is an eel garden area along with coral encrusted drums. The top of the reef, with its lighthouse, is also home to the wreck Lovilla which sits almost parallel to the wreck on Jackson Reef.

Note: The above, is a sample itinerary and is subject to change without notice. The itinerary will depend on several factors including, but not limited to, weather, diving ability of guests & the number of other boats already present at the various dive sites. All dive sites visited are subject to weather conditions and are at the discretion of your dive guides and vessel captain.