Well placed to access some of the most well-known dive sites of South Africa's east coast, the lodge at Umkomaas is run by a highly experienced South African dive staff, operating their own RIBs launched from the nearby beach and estuary.

Aliwal Shoal offers fantastic shark, wreck and reef diving. Exciting launches can be expected through rolling surf, with most dive sites within 20 minutes of the beach or river launch. Dives are typically at 20-30m in depth, following the buoy line, drift diving along the reef  or in the blue.

While the main focus is to dive with the many shark species found in South Africa, the Aliwal Shoal Reef is home to a huge variety of other marine life including Whales, Dolphin, Turtles, a variety of rays, Eels, Pelagic Fish, Reef fish & more.

Wreck Diving at the Aliwal Shoal is dependent on the current and conditions. There are two wrecks that we can dive, the MV Produce (1974) & the Nebo (1884) which are also great dive sites with loads of marine life including Ragged Tooth Sharks, Huge Brindle Bass [a highlight], Ragged Scorpion Fish, Lesser Guitar Sharks, Turtles, Butterfly Rays, Ribbontail Rays, Moray Eels, Game Fish, many species of reef fish.

During winter, between dives we also try to spot Whales & Dolphin during the surface interval. The Humpback Whale migration passes Aliwal Shoal between June and October. The whales are typically seen breaching and divers will often hear them underwater. Divers have occasionally seen them whilst on a dive providing a once in a lifetime scuba experience.

Diving in pONTA dO oURO - Mozambique

Sharks Galore are waiting to be experienced in Ponta Do Ouro:-

The diving in Mozambique takes place on the reefs between Ponta Do Ouro, Ponta Malongane & Ponta Mamoli which offer some of the best shark diving with Bull Sharks, Hammerhead Sharks and many other species of shark.

The diving is focussed on getting up up-close and personal with the many species of shark. Before each dive, the guides give a briefing to help you to understand the behaviour of the sharks, ensuring you have a safe and knowledgeable dive with the sharks.

Observe the sharks, learn how to identify the different species, understand the sharks behaviour and how sharks interpret your behaviour.

The diving is done from 8 metre RIBs which are launched from the beach at Ponta Do Ouro and dive sites are between 5 and 25 minutes away.

The experienced ScubaAddicts team run the lodges and dive centres at Aliwal Shoal (South Africa) and Ponta Do Ouro (Mozambique), focusing on dive sites that maximise close encounters with multiple shark and other pelagic species.

ScubaAddicts have well establised expert knowledge on shark identification and encounters. ScubaAddicts are so confident about their operation, that they offer a shark diving guarantee! You will receive full, interesting briefings on in-water behaviour, including how the diver should act. Diving at Aliwal Shoal is carried out from a RIB (Zodiac or similar), launched from the beach or river estuary, dive site and tide level dependant. Exciting launches and beaching through rolling surf can be expected and you will be instructed on launch and landing procedures.

Diving in Mozambique also offers encounters with a huge variety of shark species on the sites along the reefs of Ponta Do Ouro, Malongane and Mamoli. Diving is carried out from a RIB launched from the beach.

The number of dives offered are as per the itinerary and are usually offered in the morning and should conditions allow, further dives may be organised in resort. One guide is in the water with you and dives are operated in groups of a maximum of 8 divers plus a guide.

Please discuss your requirements with the Regaldive team, who will prepare a quotation suited to your needs.

Divers are recommended a minimum of PADI Advanced Open Water or equivalent qualification and a recommended logged 40 dives prior to arrival. The dive sites only suit experienced divers with experience in deep water, carrying out safety stops in the blue with no visual reference and changeable surface conditions. Competent use of your own Delayed SMB is highly recommended and most dives are around 20-30m depth.

No dive courses are offered so divers may concentrate on the recreational dive sites without restriction.

Prices listed below are an indication only, and subject to change.

South Africa is one of the most diverse and enchanting countries in the world. Exotic combinations of landscapes, people, history and culture offer the traveller a unique and inspiring experience

Mozambique boasts a tropical climate and an extensive coastline suited to those with a sense of adventure. The country is both culturally and biologically diverse with plenty of traditions and unique diving opportunities.

South Africa is located on the southern tip of the African continent, bordered by northern neighbours Namibia, Botswana, Zimbabwe and Mozambique. It encompasses the independent mountain kingdoms of Lesotho and Swaziland and is flanked by the Atlantic Ocean on the west and the warm Indian Ocean on the east - giving the country its spectacular range of biodiversity.

South Africa occupies 4% of the continent's total landmass, covering an area of 1,221,040 km². The country is five times larger than Great Britain.

Maputo is the capital of Mozambique. Located on the coast, the city boasts a fine array of colonial architecture. Other notable towns and cities along the coast include Inhambane, Beira and Nacala.

South Africa enjoys a temperate and pleasant climate, with warm sunny days most of the year. The seasons of the southern hemisphere are opposite to those in the northern hemisphere so South African summers run from November to February. South Africa enjoys one of the world's highest average daily hours of sunshine. Mozambique has a tropical climate with the warmest time to visit being October to February and the coolest in June and July.

Water temperatures will average 18-22ºC, so a minimum 5mm wetsuit, with vest, hood and booties is recommended, or 7mm semi-dry.

South Africa is home to some 43 million people - a population as diverse in makeup as the country's geography is varied. Just over half the population live in the cities. Three-quarters are Christian and most of the other major world religions are represented here.

There are 11 officially recognised languages, most of them indigenous to South Africa. English is one of these, and everywhere you go, you can expect to find people who speak and understand it. English is the language of the cities, of commerce and banking, of government and official documents. Road signs and official forms are in English and at any hotel, most service staff speak English.

The official language of Mozambique is Portuguese. English is widely spoken in resort areas.

South Africa and Mozambique are 2 hours ahead of GMT.

Both GBP and USD are readily exchanged at local banks and Bureaux de Changes. Take your money in a combination of cash and travellers cheques and take an ATM card. Most major international credit cards such as MasterCard and Visa are accepted in large shops and restaurants.

Although entirely voluntary, tipping is a recognised part of life in this region. Some local staff look to travellers for personal recognition of particular services provided.

Flights to Durban are available with Emirates and Turkish Airlines and also Virgin Airlines and South African Airways, arriving in Johannesburg with a connection to Durban.

Flight prices change daily so please call Regaldive for the most up to date quote and for information on extending your flights to Cape Town. Flights both outbound and return are typically overnight flights.

Passengers travelling to South Africa must have six months valid on their passport from the date of return to the UK and have two consecutive blank pages; a left and right page. Passengers travelling with passports that do not comply with these requirements will be refused entry.

Please Note: Parents travelling with children may be asked to show the child’s full birth certificate, and where only one parent is accompanying, proof of parental or legal authority to travel with the child.

Visas are not required by UK citizens for travel in South Africa. 90 days tourist entry is granted on arrival

Visitors to Mozambique require a visa which can be purchased at the major land and air entry points to the country. Approximate cost $25 and is valid for 30 days. Proof of onward travel may also be required.

Further information regarding vaccinations for travel to this country can be found at www.fitfortravel.nhs.uk and from your local healthcare provider. Vaccination requirements are subject to change and should be confirmed before departure. For the most up to date advice please consult your travel clinic. We recommend protection against malaria, tetanus, typhoid, hepatitis A, polio. Please consult your local travel clinic for the latest advice on different prophylaxis available against malaria for Mozambique.

"We had an excellent holiday in Africa. It was everything and more than we expected. The transfers, accommodation and staff at all 4 of our stops were faultless, very friendly and helpful. And every meal we had was excellent and very cheap.

Diving off the pinnacle for all 8 dives in Mozambique became a little repetitive, but it's the best place to see the wildlife. It also gave us one of the most amazing memories. After watching Humpback Whales on the surface fairly close to our rib, and seeing one breach in front of us, we had one dive totally accompanied by Whale Song. The whole dive, none stop very loud. And when they did the deep sonar rumble you felt it beating in your chest. It was absolutely amazing and it will live in my memory till the day I die.

My greatest memory though was the Great Whites. They are absolutely stunning. I've wanted to go in a cage for 50 years long before you could, when it was only for researchers. It was well worth the wait.

I have been away with REGALDIVE before with my dive club, but this is the first time I've booked direct. I wouldn't hesitate to book with them again.

The whole holiday was magnificent." 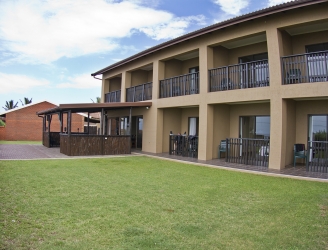 The ScubaAddicts divers lodge in Umkomaas is ideally placed to access the sites of Aliwal Shoal renowned for regular shark...