The Sardine Run has come to be known as one of the greatest marine events on the planet. The run not only consists of the vast shoals of silver sardines but the numerous predators following in its path as it moves up the east coast of Africa.

The phenomenon of the sardine run takes on many phases and undergoes many changes as it travels over more than one thousand kilometres of ocean. The sardines travel continuously north from the Agulhas Banks off the Southern Cape coast, on a cold south to north current that develops close inshore during June and July. This current not only transports the sardines to the north but also their food source, plankton.

The event has been named ‘The greatest shoal on earth’ as following and feeding on the sardines are numerous species of predators. These include different varieties of game fish, shark, dolphin, whales, seals and sea birds. It is thought that over 20,000 Common dolphin congregate for the occasion along with bottlenose dolphins, Orcas and Bryde’s Whales. Copper sharks travel up the coast in thousands from their home waters off the southern Cape and Namibian coast. Alongside the Copper Sharks both Blacktip and Zambezi sharks can be seen appearing out of the blue to feed.

Hundreds of seals and tens of thousands of Gannets and Storm Petrels also follow the ‘run’ up the coast to take advantage of the super abundance of food. The sea birds are dependent on the dolphins driving the sardines into bait balls near the surface of the ocean, where the birds can easily dive for their prey.

Humpback and Southern Right Whales can be seen at this time even though they do not feed on the sardines. They follow the same route as they migrate from their summer feeding grounds in the Antarctic to mating grounds off the southern and eastern coast of Africa. The humpbacks can often be seen performing impressive leaps out of the water, known as breaching.

Regaldive has teamed up with the leading specialist ‘sardine run’ dive operator in South Africa, to offer divers the chance to experience this incredible event.

The focus of the expedition is to provide guests with the maximum adventure and excitement during their stay, within the boundaries of responsible tourism and protection of natural resources. The few licensed Sardine Run operate under strict guidelines and a percentage of your trip cost is donated to a local conservation group or charity.

Each departure listed has around a maximum of 50 clients, organised into small groups of 7 divers with their own skipper and dive master. Each morning your divemaster will brief your group on the day's activities. Boats operate independently from one another, receiving guiding instructions issued by the microlight spotter.

Should the dive boats not be able to launch or stay out as long as hoped due to rough weather conditions, other activities will become the focus of the programme for the day, although it is likely you will get the chance to take part in these, even if you are on the water everyday.

These activities include (a small charge is levied locally, except for the microlight flight which is included):

The expeditions have run with a 100% safety record since the start of operations in 2001 and are operated by highly skilled staff members, all of whom have excellent knowledge of the local area.

The flexible nature of the expedition format has delivered high rates of success with guests enjoying the highlights of the area both on land and in the ocean.

The area of the Wild Coast is one of incredible natural beauty with tropical valleys rolling toward the coast where fresh water waterfalls plunge hundreds of feet into the sea below. This fascinating region offers an excellent base to enjoy the wonders of the sardine run and the rich South African culture and climate.

The Sardine Run is a natural phenomenon and as such, is subject to its own timetable and agendas. The run begins toward the end of May and can extend into late July, though the movements of the shoals are virtually impossible to forecast.

Dates for the expedition run over the period that historically falls in the middle of the run to maximise the chances of seeing this incredible spectacle.

The dive boats used are eight metre Zodiacs catering for max. 7 divers plus licensed skipper & DM. Numbers are kept low to ensure diver comfort, safety and flexibility to move quickly in and out of the water and relocate.

The dive boats are assisted from the air by a microlight aircraft. The pilot radios sightings of the sardine shoals direct to the dive boats to guide them to the action.

During the day's activities, first priority is given to water encounters on snorkel gear, in order to tick as many 'marine boxes' as possible. This also means you can exit and enter the water quickly without limitations imposed by dive safety stops and surface intervals. Then you will move onto the dives. This also means it is very suitable for non-divers confident in the water.

Accessing the sardine run from Port St Johns provides the very best chance of seeing the sardines together with the pursuing predators. The combination of the finest possible visibility, conditions and marine life comes together at this point of the coast.

Conditions will vary from glass-like seas to flying through giant rollers in pumping winds. Safety is always the priority and skippers will navigate accordingly. Visibility can vary from 2 to 20m and the dive master will determine if it is safe to enter the water if visibility is particularly low.

The reasonably strenuous nature of the diving means the expedition is more suited to experienced, advanced divers and requires a recommended 50 logged dives. Guests are advised that a good base level of fitness will provide a more enjoyable experience.

Water temperatures vary from 15 to 21ºC in the winter season. Due to the nature of the diving it is advised that you take your own dive equipment to ensure comfort and ease in the water. A 5mm wetsuit will most often suffice with boots, hood and gloves recommended. A 7mm semi-dry will be appropriate for divers who get cold easily.

Should the dive boats not be able to launch in bad conditions there are a number of alternative activities arranged by SEAL. Most are done as a matter of course even if the dive boats do launch. These include all guests getting to fly in the microlight spotter aircraft over the Wild Coast, hiking trails, horse-riding and cultural experiences.

(NB: A small charge is levied locally for the additional activities you choose to partake in, except for the micro light flight which is included in the price.)

South Africa is one of the most diverse and enchanting countries in the world. Exotic combinations of landscapes, people, history and culture offer the traveller a unique and inspiring experience.

South Africa is located on the southern tip of the African continent, bordered by northern neighbours Namibia, Botswana, Zimbabwe and Mozambique. It encompasses the independent mountain kingdoms of Lesotho and Swaziland and is flanked by the Atlantic Ocean on the west and the warm Indian Ocean on the east - giving the country its spectacular range of biodiversity.

South Africa occupies 4% of the continent's total landmass, covering an area of 1,233,040 km². The country is five times larger than Great Britain.

June & July are during the 'dry' season, and there is little run off from the country's rivers. However, when the Sardine action is in full swing, localised areas can experience lower visibility.

Water temperatures will be around 19ºC, so a minimum 5mm wetsuit, with vest, hood and booties is recommnended, or 7mm semi-dry.

South Africa is home to some 43 million people - a population as diverse in makeup as the country's geography is varied. Just over half the population live in the cities. Three-quarters are Christian and most of the other major world religions are represented here.

There are 11 officially recognised languages, most of them indigenous to South Africa. English is one of these, and everywhere you go, you can expect to find people who speak and understand it. English is the language of the cities, of commerce and banking, of government and official documents. Road signs and official forms are in English and at any hotel, most service staff speak English.

South Africa is 2 hours ahead of GMT

Both GBP and USD are readily exchanged at local banks and Bureaux de Changes. Take your money in a combination of cash and travellers cheques and take an ATM card. Most major international credit cards such as MasterCard and Visa are accepted in large shops and restaurants.

Although entirely voluntary, tipping is a recognised part of life in this region. Some local staff look to travellers for personal recognition of particular services provided.

Flight prices change daily, so please ring us for the most up to date quote and for information on extending your flights to Cape Town.

Flights both outbound and return are typically overnight flights. Outbound flights arrive Durban no later than 11.00 hrs on day 1 and depart Durban no earlier than 15.00 hrs on day 9.

Passengers travelling to South Africa must have six months valid on their passport from the date of return to the UK and have two consecutive blank pages (a left and right page). Passengers travelling with passports that do not comply with these requirements will be refused entry.

Please Note: From 1 June 2015, parents travelling with children may be asked to show the child’s full birth certificate, and where only one parent is accompanying, proof of parental or legal authority to travel with the child.

Visas are not required by UK citizens for travel in South Africa. 90 days tourist entry is granted on arrival. Visitors to Mozambique require a visa which can be purchased at the major land and air entry points to the country. It currently costs $25 and is valid for 30 days. Proof of onward travel may also be required.

Further information regarding vaccinations for travel to this country can be found at www.fitfortravel.nhs.uk and from your local healthcare provider. Vaccination requirements are subject to change and should be confirmed before departure. For the most up to date advice please consult your travel clinic. We recommend protection against malaria, tetanus, typhoid, hepatitis A, polio. Please consult your local travel clinic for the latest advice on different prophylaxis available against malaria for Mozambique. 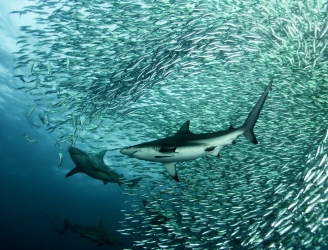 The Sardine Run has come to be known as one of the greatest marine events on the planet. The run consists of vast shoals o...