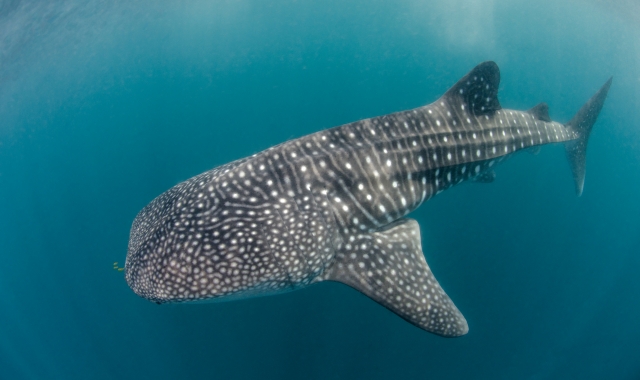 Intrepid photographer and adventurer Malcolm Nobbs files this trip report from his twin centre holiday last October, taking in the underwater highlights of Djibouti Town and liveaboard MY Deli:

In October 2013 I spent two weeks in the Republic of Djibouti, a small country in the Horn of Africa bordered by Eritrea, Ethiopia and Somalia. For the first week I stayed in the capital city, Djibouti Town or as it is otherwise known, Djibouti City. Djibouti Town is a dive location like none I had experienced before. A strong military presence was everywhere with low flying helicopters and mirage jets checking to see if we had spotted any whale sharks, very high air temperatures and with the sea 31 to 33 degrees Celsius, I sometimes dived deeper just to cool off!

I dived there with Dolphin Excursions, the only PADI Gold Palm accredited dive centre in Djibouti and a very friendly dive centre as well. Every day I was collected from my hotel by my dive “mentors” Sarah Gray or Sonja Karjalainen or dive centre manager Dan Drahozal and then using a local skiff, we dived local sites such as Canyon, Moucha North, Ras Eiro, Sunken Buoy, White Sands or my favourite: the wreck of Orchard Reefer. I’ve been privileged to dive some excellent wrecks in my time, undoubtedly the wreck of Orchard Reefer is one of the best to explore and photograph. This Liberty Ship lies on its side in about 33 metres of water near Moucha Island, 9 kilometres from Djibouti Town. Just over 100 metres long, the top of the vessel is 8 to 9 metres from the surface. Orchard Reefer was abandoned by its crew in November 1974 after fire in its engine room. The Bay of Tadjoura is current free making this a pretty safe wreck to dive. Penetration is tempting but with narrow staircases and plenty of potential entanglements, that’s not a good idea.

Dolphin Excursions had the perfect blend of efficiency and friendliness. And I don’t think I have ever been spoilt quite so much as I was by Sarah and Sonja. I responded by getting lazier and lazier. For example our last two dives together were once again on Orchard Reefer. Another perfect day - no hint of even a small cloud. The sea was flat calm. I surfaced from the first dive and could not be bothered to climb aboard our skiff. So I floated around next to our skiff while Sarah and Sonja changed my tank on my BCD and then handed everything down to me including sandwiches and water to revive me! I don’t think they could have pampered me more.

Next up was seven nights aboard MY Deli a twin mast motor yacht. Our voyage took us from Djibouti Town to the Gulf of Tadjoura where from mid October to February, juvenile whale sharks can be seen. These whale sharks are attracted by plankton ‘blooms’ and our Regaldive group was lucky enough to enjoy several snorkelling encounters with them.

Djibouti sits between the African and the Arabian tectonic plates and it’s possible to dive the crack between the two tectonic plates at a dive site imaginatively called The Crack. I let my buddy Graham Illing do that – why risk both of us! Other dive sites we visited were Deli, Ras Eiro, Shark Island, The Dome, Point Ras Korali, Red Virgin, Star Point, Vicente’s Dive, named after our skipper, Yellow Marker Buoy, and bizarrely Stoney Cove. The latter named unsurprisingly by a group of British divers after the well-known site in Stoney Stanton, UK.


See an album of photographs from Malcolm's trip on the Regaldive Facebook page.

Our great friend and partner Romney who owns and manages the fabulous Boutique Beach in the...

Top 10 Diving Holidays on a Budget

We offer a huge range of dive holidays to suit all budgets and here we have selected the top 10...