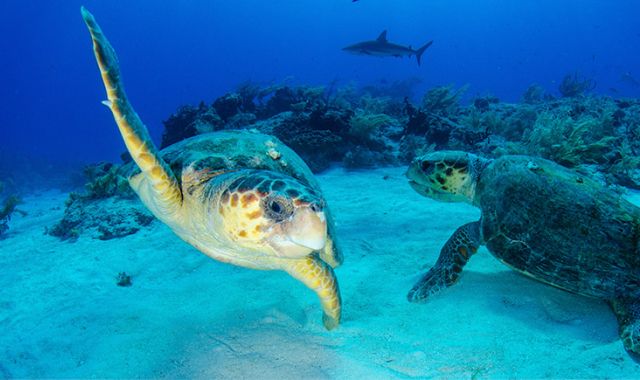 For this year's World Turtle Day we asked Cath & Charlie for their most memorable turtle encounters they've experienced and why these species shouldn't be overlooked on a dive.

In my years of diving I have had many lucky encounters with turtles, even seeing them chased by sharks! One memory though particularly stands out from a trip to Bunaken National Park, North Sulawesi in Indonesia. While you can be divebombed by a multitude of both green and hawksbill turtles throughout your time there, occasionally one will steal your heart. 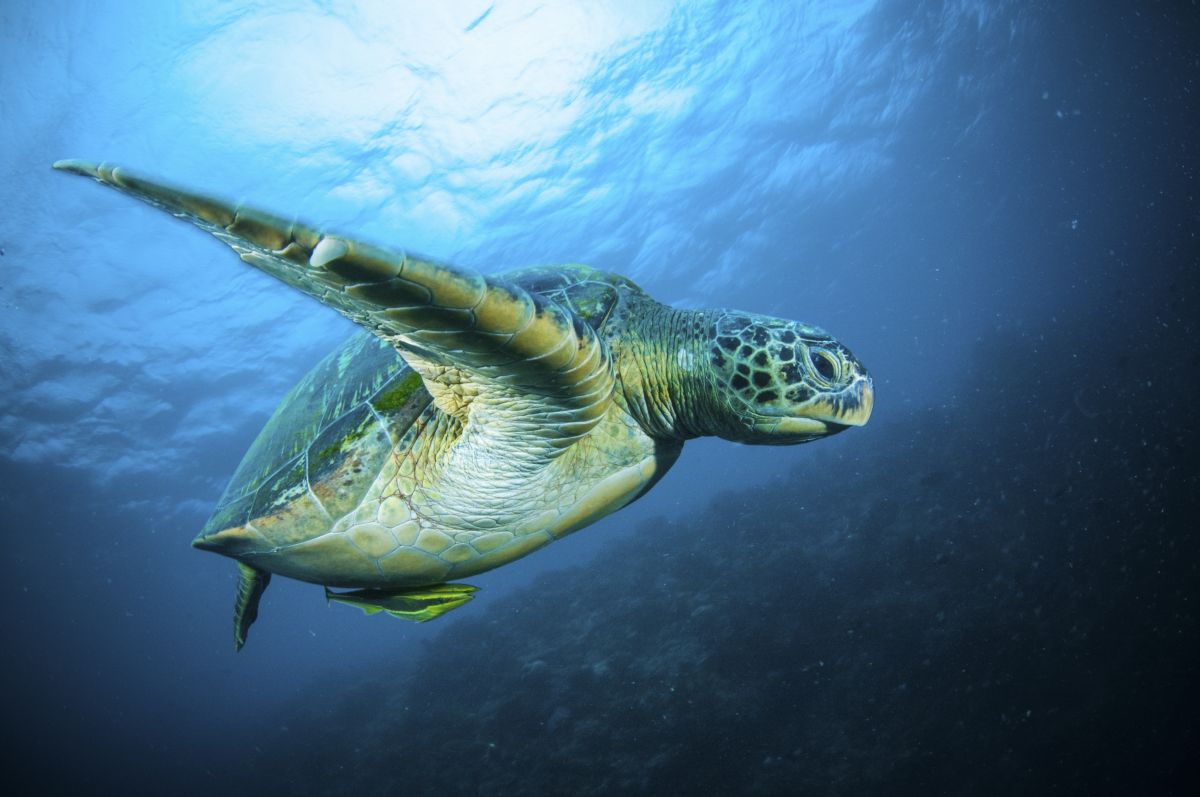 Cruising along the wall of Manado Tua, I turned mid-dive to find a medium-sized green sea turtle gently finning next to me. She passed right in front manoeuvring her body lithely to look me over and check I wasn’t a threat, before settling down beneath a ledge on the wall. It was too good a photo opportunity to miss and as I slowly approached, she began scratching her carapace like a cow on a fence. Allowing me to snap her contented portrait she slowly moved along the reef to munch on some tasty broccoli coral. The coral broke up in the water generating a cloud of goo. I clearly wasn’t of interest but she would occasionally glance to her left and right to check nothing was coming to steal her dinner.

After happily posing for some more photographs, she lazily pushed off the ledge and swam into the clear blue water. Her ornate shell featured dark sunflower bursts of brown, white and gold as if it had been painted by an impressionist artist. Something startled her and she began to pelt faster and faster making it look like she was leaving a trail of fire behind her. Then - as if someone had tied her to a bunch of helium balloons - she floated effortlessly up to the surface to catch her breath. Silhouetted against the sun I marvelled at the prehistoric shape that had just afforded me such a memorable moment in time. Within seconds she turned, swimming downwards into the abyss and was gone.

My favourite turtle interaction was during my time working aboard the Odyssey liveaboard in Truk Lagoon.

My favourite dive in Truk Lagoon was on the huge Shinkoku Maru, an old fuel tanker in the Japanese fleet. This oiler is a haven for hard and soft corals and as it is one of the rarer wrecks that sits in the middle of nowhere (rather than at anchor off the coast of one of the islands), it was always a magnet for any wildlife in the area. Sitting on white sand at a max depth of 40m and standing a good 28m to the top of the superstructure (the masts come to within 7m of the surface), the Shinkoku offers fantastic multi-levelling diving.

On one such dive, having bimbled about in the massive engine room and made my way up to the rear deck, I began my gradual ascent to the boat (and hot food) with a quick stop atop the huge smoke stack that dominates the rear half of the deck. It is covered in so much life, it could easily be classed as a reef all unto itself. As I neared the top of the smoke stack, I initially made out a large dark shadow. My first thought was this was another guest who was now late for their evening meal, but on closer inspection it was obvious this was a very, very large green turtle. Everything about this big-boy was oversized. The carapace was at least my size, his head was the size of a football. He was so large, I was a little bit intimidated to be honest. Fully expecting him to take offence at my arrival, I was surprised he barely reacted at all. He was far more interested in the smorgasbord of soft sponges adorning the perimeter of the chimney. As he munched and crunched his way around, I just knew I could settle down for a closer inspection. 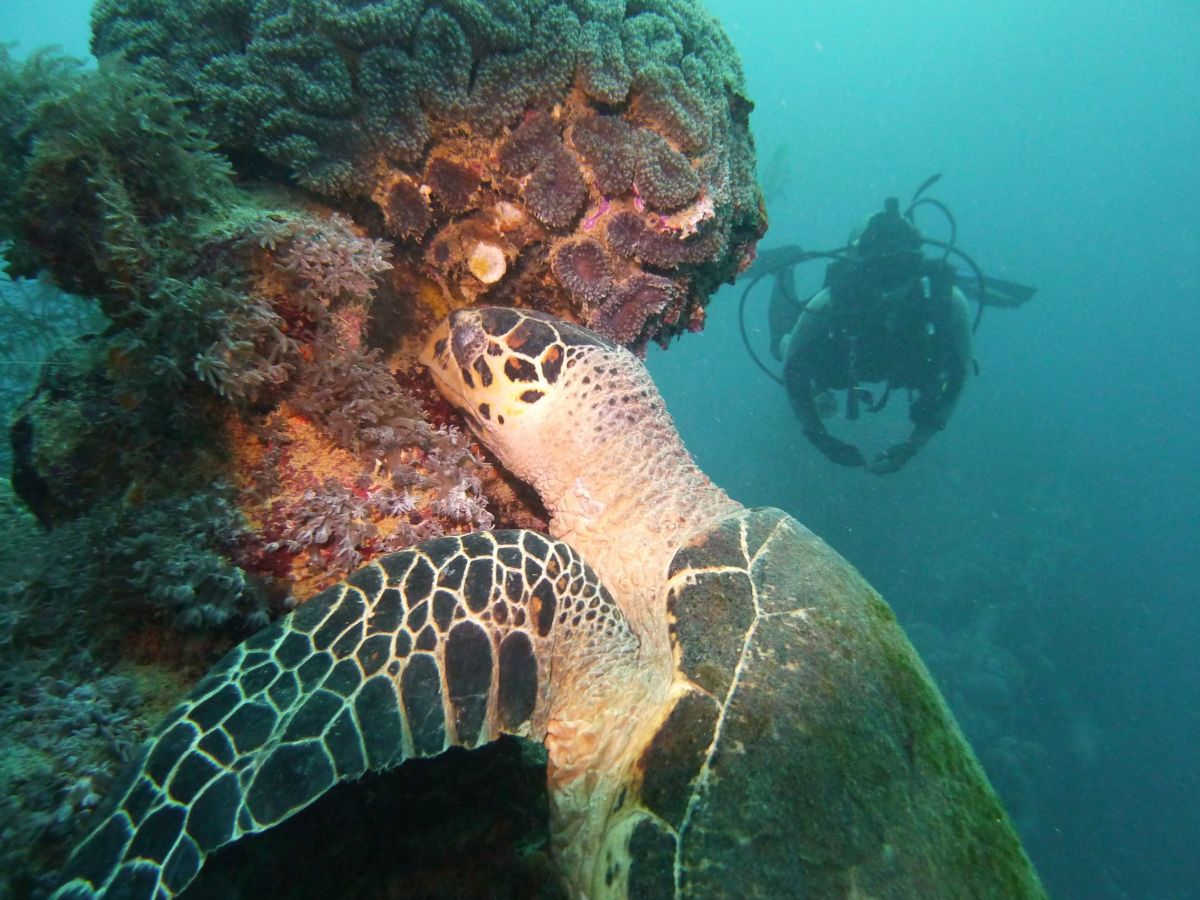 Bit by bit, as he moved to his right, I shimmied to my left until I was right up against him. I could hear him eating. He could surely hear my breathing but neither of us were perturbed and something rather magical happened. He shuffled closer and almost as if yawning at the same time, his front right flipper came to rest on my left arm. This was a 'moment', you know that time when everything around you is just calm. The 'moment' you look around to see if anyone else is bearing witness but realise you are totally alone. The 'moment' you know you are at one with nature and neither of you are deemed a threat to the other. I immediately wanted to put a name to this gentle giant and the name Benson came to mind, his namesake was a local guy working alongside me on the Odyssey. Over the following weeks and months, Benson and I would regularly meet up at the same smoke stack. He was always there, always munching, always chilled. Initially I kept him secret from the others aboard but if I knew a guest was likely to be diving at dusk, I began to make it known where to find him. On my last visit to Truk in 2019, I did not see either of the Bensons but that's OK. I know they are both out there, both yawning, both are either eating or preparing to eat and that just makes me smile.

Feeling inspired? We offer a range of holidays where turtle sightings are common, and we can also arrange trips to see them nesting in season - an unforgettable experience that's sure to make for a rewarding holiday.

Dive with turtles in Oman.

Dive with turtles in Tobago.