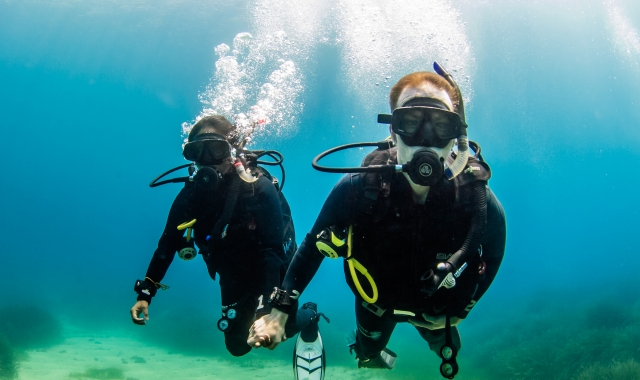 There's no need to fly to far-flung locations to learn how to dive! Press Association writer Nilima Marshall recently visited the Maltese Islands on a Regaldive holiday with her husband to earn her scuba stripes...

"Bruce Willis Ruins All Films," I say to my partner as we get ready to see the glimmering emerald sea in the beautiful Maltese island of Gozo. We're not debating the acting merits of the hunky Hollywood superstar, but rather making vital checks for our final diving adventure at Xlendi Bay. Before taking the plunge, we need to carry out pre-dive safety checks for Buoyancy, Weights, Releases, Air and 'Final okay' - and that's where the mnemonic comes in (sorry Bruce!). It sounds complicated, but it's actually quite a simple task - even for someone like me, who's never even had a swim at the beach, let alone descended 18 metres below the water's surface.

Equipment thoroughly examined, we head off to the bay for the final dive. As we slowly descend, an unseen enchanting world emerges before my eyes. Thousands of colourful fish of all shapes and sizes gently weave through this captivating underwater garden: amberjack, bream, red mullet and parrot fish are some of the many species that form Gozo's incredible marine life population. Hundreds of bream, shimmering in the water with silvery translucent bodies slowly glide past as we gradually move deeper. A spiky sea urchin slightly startles me as it scatters its spores into the ocean; we also sight a sea cucumber, fireworm, cardinals and a bright orange starfish resting on the rocks.

Our instructor Richard Salter spots a tiny octopus tucked away beneath the green seaweed - I can hardly believe my eyes. The entire experience is an amazing technicolour dream come to life - I feel like I've swum into the exotic, magical world of Finding Nemo.
After touching our deepest point at 18.5 metres and negotiating a rocky tunnel, I realise how breathing through a regulator and moving weightlessly has become second nature in only a few days.

We have enrolled to take part in a PADI course with St Andrew's Divers Cove in Xlendi. The programme aims to provide beginners like me with the basic skills for dives to up 18 metres. St Andrew's is a friendly dive centre, and a magnet for divers from around the world. The centre not only has 11 instructors but is just a few steps away from Xlendi Bay, which is perfect for newcomers like us, who are staying at St Patrick's Hotel nearby.

As a first-time diver, I have my apprehensions. Thankfully, Richard immediately puts us at ease, reassuring us that diving is actually one of the safest sports - providing you follow the rulebook, have reliable equipment, and you never dive alone or beyond your experience. "Diving is fun and amazing, but being complacent about your gear could get you into trouble," Richard warns us. With more 6,000 logged dives, he knows a thing or two about what could go wrong. "Diving is not a contest," he tells us in one of our training sessions. "The slower you move, the better diver you are."

During training Richard takes us through the basic theory and science of scuba diving. We learn about the effects underwater pressure has on the lungs and why it's important never to ascend or descend too quickly.. The trick is not to panic, which is easier said than done - especially when we are removing our regulators and masks underwater, simulating real-life scenarios, such as running out of air or losing our masks. The experience feels strange at first, but once we start trusting the equipment, we are hooked. I can't wait to get my PADI Open Water Diver scuba certification.

Seeing the world underwater is a dream for many people, and I consider myself fortunate I did not have to travel very far. A little over three hours away from London by flight, Gozo is pretty much on our doorstep. Home to more than 60 dive sites, Malta and Gozo have been awarded the second best diving destination in the world by Diver magazine last year (Egypt came first), because of their range of exciting wrecks and diversity of marine life.

While Gozo has one of the most incredible underwater environments, there's lots to do on this tiny island if you want to stay on land. Xlendi itself is a popular tourist destination, brimming with restaurants offering local fish and Mediterranean cuisine - and the secluded bay is the ideal place to unwind and catch the sunset. Gelateria Granola in Xlendi, I am told, is one of the best ice cream shops in Europe and the tiramisu flavour I order is absolutely delicious. Further afield is the Azure Window (or Tieqa Zerqa in Maltese) - a limestone arch near Dwejra Bay, popular with scuba divers as well as visitors. The site has featured in many films and television series, including Game Of Thrones. Mgarr Ix-Xini, a breathtaking, peaceful strip of blue water between two cliffs is also worth a visit. At the entrance to the bay are the crumbled remains of a coastal tower built by the Knights of St. John in 1658.

Malta itself is only a short ferry ride away, and we dock at Cirkewwa Harbour for a day of sightseeing. We drive through the island, past the busy beaches and cacti-strewn landscape to the capital Valletta - which was awarded World Heritage Site status by UNESCO in 1980. The Grand Harbour is resplendent with history and character - from Fort Ricasoli, built by the Knights of Malta in 1693, to the beautifully restored 16th century warehouses and the leafy Upper Barrakka Gardens. Fort Ricasoli is occasionally used for filming - Russell Crowe is said to have wielded his sword while filming Gladiator within these fortified walls.

Malta is blessed with natural harbours and has long been a hub of commerce, but its strategic location means the country has been invaded by numerous rampaging forces. "Malta, Gozo and Comino were invaded many, many times - and fought over by the Phoenicians, Romans, French and British," our guide Nicolette Camilleri tells us. As a result, huge fortifications, including Fort St Elmo, had to be built around Valletta to deter the Turks from further invasion. Centuries later, British-ruled Malta was a target of more than 15,000 tonnes of bombs in the Second World War - becoming the most bombed location during the war. Malta was awarded the George Cross in 1942 as official recognition of the country's bravery.

We hop on to a traditional Maltese water taxi, known as 'dghajsa', for a leisurely ride through the harbour to the Vittoriosa Waterfront. Here, al fresco dining spots overlook the marina and private luxury yachts. (Chelsea football tycoon Roman Abramovich is said to have one docked here.) Among other attractions is the majestic St John's Co-Cathedral, hosting a treasure trove of priceless paintings. Built for the Knights of St. John in the 16th century, the building boasts spectacular ornate interiors with roof panels depicting scenes from John the Baptist's life. The island still retains a colonial feel and plenty of British references with old-fashioned red telephone and pillar boxes. The 'Silent City' of M'dina, with its narrow cobbled streets and mix of medieval and baroque architecture, makes it one of the most enchanting places on the island.

We conclude our tour by heading off to Rabat countryside for a quiet lunch at Rogantino's, the perfect place to get away from the crowded seaside. The 500-year-old building, which was refurbished to become a popular dining spot, exudes homely charm and rustic ambience. Rogantino's houses a variety of wines, including port and sherry dating back to the 1920s. The owner, Tony Grech, happened to come across a cache of fortified wines at a warehouse that had been abandoned 65 years ago.

As we relax in the restaurant gardens, unwinding with a glass of local chardonnay and admiring the overlooking lush vineyards, I begin to understand why the Maltese islands draw so many visitors from across the UK. Malta and Gozo may be diminutive islands, but they're priceless little gems floating in the Mediterranean, captivating us with a wealth of amazing, exotic attractions - on land and underwater.

Top 10 Places to Learn to Dive

Save 25% on Aggressor Liveaboards

Grab yourself a deal with 25% off selected Aggressor Liveaboards.

Save up to 25% with Emperor Divers

Enjoy a fantastic saving of up to 25% on selected Emperor liveaboard departures.