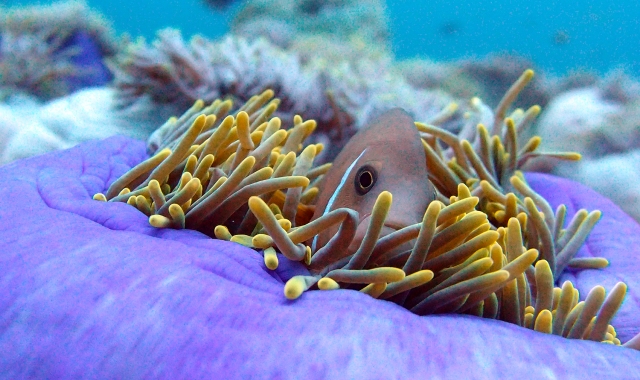 I‘ve just returned from my first liveaboard trip to the Maldives aboard the lovely MV Sharifa. After a couple of years organising Maldives holidays for Regaldive customers I eventually got the chance to experience it for myself, and what an experience it was!

The diving started in North Male Atoll and I knew it was going to be a good week when we were buzzed by a couple of blacktip reef sharks on the very first dive. Also a friendly turtle and about five different types of moray eel made it a great check dive.  The second dive didn’t disappoint either, with our first manta ray and being checked out by a curious dolphin.

Then we moved on to South and North Ari Atolls, where all the rest of the weeks diving took place. South Ari Atoll is also the place to see whale sharks if you are lucky, as we where. When we arrived at a well -known whale shark location there were a few resort boats about, with quite a few people in the water. So we waited for them to leave and had a whale shark to ourselves, with two quite close encounters whilst snorkelling.

If I thought that was good, then far better was to come. I’ve done nearly 400 dives now, but during this week I had a dive that’s gone straight into my top three dives ever - a night dive with mantas! The crew put a bright light to shine into the water at the back of the boat, which draws in plankton, like moths to a light. Of course the mantas are clever and know this, so come in for a feast. Just watching them from the boat is enthralling, but far better was to come.

After descending, we knelt on the sand in about 9m, three metres away from a cluster of dive torches. Within seconds a 3m manta was gliding though the light with his mouth wide open, doing back flips and going around again. Soon he was joined by two others. The best part was when they swam close to the light and headed straight towards us, with a great view into their open mouths, pulling up at the last moment and almost skimming the top of our heads. Luckily, there was just about enough light to get some stills and video of a fantastic experience.

One night dive is the norm on Maldives liveaboards, but we were lucky enough to do a second.  This was a dive down to the reef on the flat top of a sea mount at 15m. It soon became evident that all the reefs’ predators were out on the hunt.  With whitetips zipping about, free swimming morays and a couple of large stingrays it was difficult to know which direction to shine your torch.  I felt like I was participating in one of those TV documentaries I’ve watched so many times.

The Maldives is certainly is a great place for diving if you like the big stuff.  Enough grey reef, blacktip and whitetip reef sharks, eagle rays, mantas, turtles, morays and big predatory fish to keep everyone happy. I checked my log book and estimated that we saw sharks or mantas on 90% of our dives. If a Maldives liveaboard is not on your dive wish-list already, it really should be!

See photos of John's Trip on the Regaldive Facebook page >

Seize the Day with a Maldives Liveaboard

Dive the world for less

Here at Regaldive the wellbeing of our clients and staff is always our priority and we continue to...

Find out which diving destinations are on the Green & Amber List and where you can travel to...

7 Dive Sites in Thailand to Make you Smile

We share the very best diving in Thailand to inspire your future dive holidays!